skip to main | skip to sidebar

Well, we did it! We attended our first mega event - GeoWoodstock VIII in Carnation Washington. And while we were there, we paid a visit to Groundspeak HQ and made the trek to the Project A.P.E. cache, thus completing 2/3rds of the much sought-after geotriad.

Our first leg of the journey took us from Salmon Arm to Wenatchee, WA and we basically geocached all the way, so the trip down basically took a whole day. June 30th was also a memorable day as it was when we found our first US geocache: Depot Transplant

The next day, July 1st, we made the trek to Groundspeak HQ. Battling Seattle traffic is never fun, but we managed to survive it. It wasn't quite as exciting as I expected it to be, basically you can only visit the reception area, but there is a Groundspeak geocache with a bunch of items, a couple of bins full of trackable items (I dropped one of our coins there, hey why not) and a log to sign. For the most part, I basically my time there writing down codes of all the trackables I could find - something I doubt many do, especially since the coin I dropped there was only logged once (as of the time of this writing). Still, a very neat experience, but it was pretty stressful so we opted not to return for the 10 year bash that they were putting on the day after the mega.

The next day, we participated in the WSGA-organized hike to the famous Project A.P.E. cache (Mission 9: Tunnel of Light), which was remarkably well done. I'm actually very impressed with the job that they did, and for having the foresight to come up with a plan to deal with the hundreds of pilgrims making the trek to this very famous geocache.

Overall, the hike was much easier than any of us had anticipated. We took turns carrying Melissa in the backpack carrier, which actually made the overall trek much easier. However, it was raining on and off which complicated things, and on top of it all since we had overestimated the difficulty of the hike we were a little more prepared than we needed to be. The first 20-30 minutes of the hike was relatively intense, but once we made it to the Iron Horse trail it was smooth sailing. The large number of people making the trek that day took away from the experience somewhat, but we took it all in stride. While we were there we took the opportunity and found the other geocaches along the trail as well, plus took a look at the now-closed tunnel.

Later that evening, we headed over to the COWWS Meet & Greet Luau where we were treated with free food which was immensely welcomed after a long cold day hiking the trails. We picked up our GeoWoodstock registration packets, bought a couple of coins, and then went back to our hotel for a much needed night's sleep.

The next day, we eagerly attended GeoWoodstock. Being our first mega, we weren't sure what to expect except for a lot of people. And we were still surprised. But it was well organized, with lots of parking and a very suitable venue. Overall, I would rate our experience there as mediochre, as very little of what was being offered there was actually interesting, and (in IMHO) it was really little more than a venue for numerous vendors to tap into a huge number of people with gobs of disposable income to spend on their hobby. But, nonetheless it was a very memorable experience and I am glad we went.

On our way home, we stopped for another night in Wenatchee, and were pleasantly surprised to discover an event (A Cache-cadian 4th of July) was planned for that evening in a park right behind our hotel! As it turns out, being July 4th, that park was the preferred viewing venue for the fireworks display, but it wasn't necessary as we got a great view from our hotel window!

On top of everything else, we stumbled across a couple of benchmark caches which earned us a couple of more icons for the trip. What a blast! 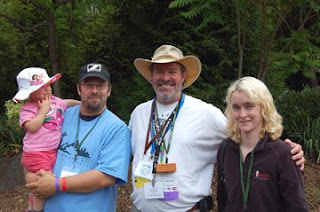