skip to main | skip to sidebar

Best of the Bad Mega Event

This weekend, we made the trek to Three Hills, Alberta to attend the Best of the Bad Mega Event, western Canada's first mega event!

This was our 2nd mega event, after attending GW VIII last year. We had been tasked with bringing Bernie's Traveling Geocache along with us to deliver to Landsharkz. In addition to the event, we also attended the first ever Canadian GPS Adventures Maze (woohoo!) which was actually a lot better than I had originally expected, and the obligatory event CITO, and a over 50 other geocaches in and around Three Hills. We also got to meet the fellow who put the maze together, which was an added bonus.

We also had the opportunity to introduce my uncle and aunt who live in Calgary to geocaching with this event, they also attended the GPS Adventures Maze with us, and also nabbed a CITO as well!

Not long before leaving we had the privilege of meeting and having our photo taken with Jeremy Irish, one of the founders of Groundspeak.

We also ended up with a bunch of cool trackables from the event; I was particularly impressed with the event geocoin, Landsharkz always does a great job on the coins they produce and this one was top notch. Jeremy also gifted us a couple of his personal trackable tags and we bought a few coins at the event as well.

All in all a great event and a fun adventure! We really enjoyed this opportunity to explore and geocache in an area that we normally couldn't. 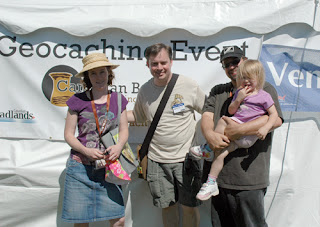 Team rhondle with Jeremy Irish
Posted by Rhondle at 2:36 PM